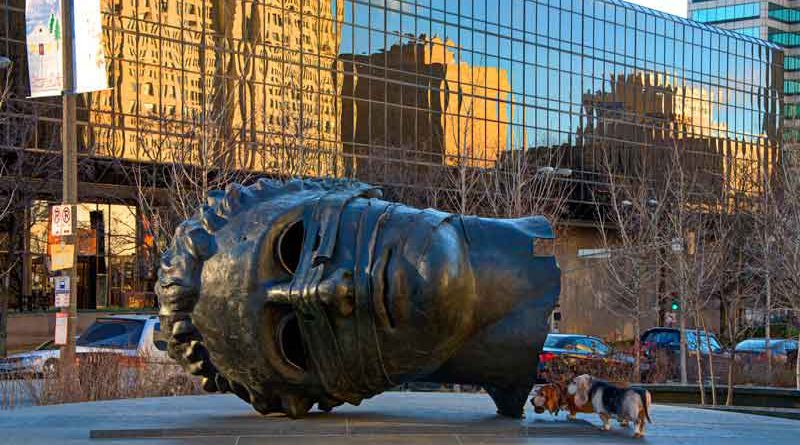 Aloe Plaza Park was made possible by an $87 million bond issue in 1923. The funds were used for the widening of Olive Street and the clearance and development of land for several plazas in the area bounded by Market, Chestnut, 12th and 20th Streets. The plaza was envisioned by Louis P. Aloe and made reality by his wife Edith Aloe in 1940. Louis Aloe served as President of the Board of Alderman from 1916 to 1923 and led the movement for passage of the bond issue.

Citygarden is a sculpture park located in downtown St. Louis. The park full of free interactive art, fountains and gardens spanning two blocks in downtown St. Louis. Wonderful winding paths lead guests past 24 sculptures, six rain gardens, a children’s spray plaza and a 180-foot-long pool with a six-foot waterfall. The park is not enclosed from the street and can be entered from any direction.

Kaufmann Park is named after from Aloys P. Kaufmann, the last Republican mayor and is one of a series of six parks along Market Street in the Downtown West Neighborhood. The beautiful and peaceful Soldier’s Memorial Military Museum is also part of this stretch of land.

This two acre park was dedicated in 1962. Named in honor of Harry J. Kiener who was born in St. Louis on February 27, 1881. He was an amateur boxer, wrestler, and swimmer, but he is most noted for his position on the U.S. track team at the Olympics held in St. Louis in 1904 during the World’s Fair.

The park features a playground, fountains and concert area and has a number of paths and a lawn that can accommodate a variety of events. “The Olympic Runner” statue honors the former Olympian and was created by artist William Zorach.

Luther Ely Smith Square is the beautifully landscaped green space that leads to the entrance of the Arch. Born in 1873, Luther Ely Smith was a St. Louis lawyer and civic booster who first proposed a riverfront memorial for President Thomas Jefferson and his efforts led to the creation of the Gateway Arch.

Lucas Gardens Park is located next to the St. Louis Public Library in Downtown St. Louis. Donated to St. Louis in 1857 by James H. and Marie E. Lucas in memory of Honorable John B. C. Lucas. This park includes a playground and a dog park.

Memorial Plaza is surrounded by Union Station, Peabody Opera House, Soldier’s Memorial Military Museum and the St. Louis Law School. Dedicated in 1932, Memorial Plaza is on the eastern side of the park where there is granite monuments to each of the foreign wars. Names of St. Louisans who served and lost their lives in these wars are on display.

Poelker Park is named in honor of John Poelker, Mayor of St. Louis from 1974-1977 and can be found on Market Street in the Downtown West Neighborhood. Poelker Park is one in a series of parks as you work your way west from Tucker Boulevard and Market Street (Poelker Park, Washington Square Park, Kaufman Park, Memorial Plaza Park, Aloe Plaza and Aloe Plaza West).

The Serra Sculpture Park is a little over one acre and it’s claim to fame is artist Richard Serra and his famous sculpture named “Twain”. Serra is an American minimalist artist born in 1939 in San Francisco, educated at Cal-Berkeley and Yale, and was commissioned to do Twain.

Washington Square Park is one of a series of six parks along Market Street in the Downtown West Neighborhood. Working west from Tucker Boulevard and Market Street you have Poelker Park, Washington Square Park and Kaufmann Park, then Memorial Plaza Park, Aloe Plaza and Aloe Plaza West and is the biggest at over 13 acres. This park was commissioned in 1840 and is one of the oldest substantially sized parks in the city. There are a couple statues on the property, one commemorating the 18th President and Civil War General Ulysses S. Grant, victorious, after the Battle of Lookout Mountain, Chatanooga, Tennessee in 1863. 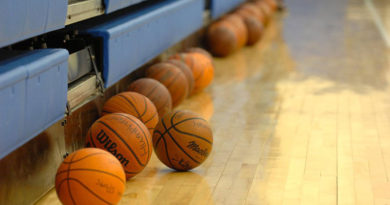 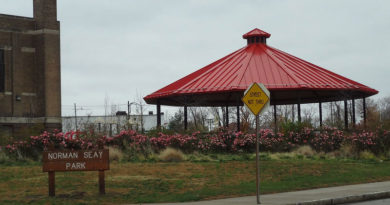